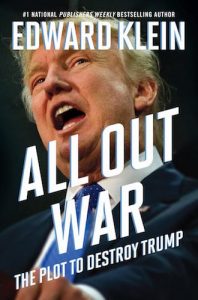 This book outlines the dastardly game-plan of the Never-Trump Republicans and Democratic Party establishment to take out the polarizing President. Exposing many radicals on campuses, in the media, and intelligence communities. Many that are now suffering from Trump derangement syndrome.

Interestingly, the book mixes factual documentary reports with behind-the-scenes narratives told in the first person with quoted dialogue. Appendices include the controversial DNC-funded ‘Trump Dossier’ and FBI field reports on the ‘resistance’.

This book is very relevant right now, as key points about the Russian hacking scandal and FISA warrants have recently been proven accurate. All Out War is especially recommended for political activists looking for an inside view.