From micro atomic to macro galactic.

Seeing the infinite micro and the infinite macro from the lens of Islam. There are many ways to “trip out”. One method for Muslims to take a cosmic trip is through intense meditation and prayer. This series examines the mathematical relationship between the micro and the macro. We dive deep into numbers, shapes, and patterns.

KM, in collaboration with Lannie Le

In the name of God,
The Most Gracious,
The Most Merciful. 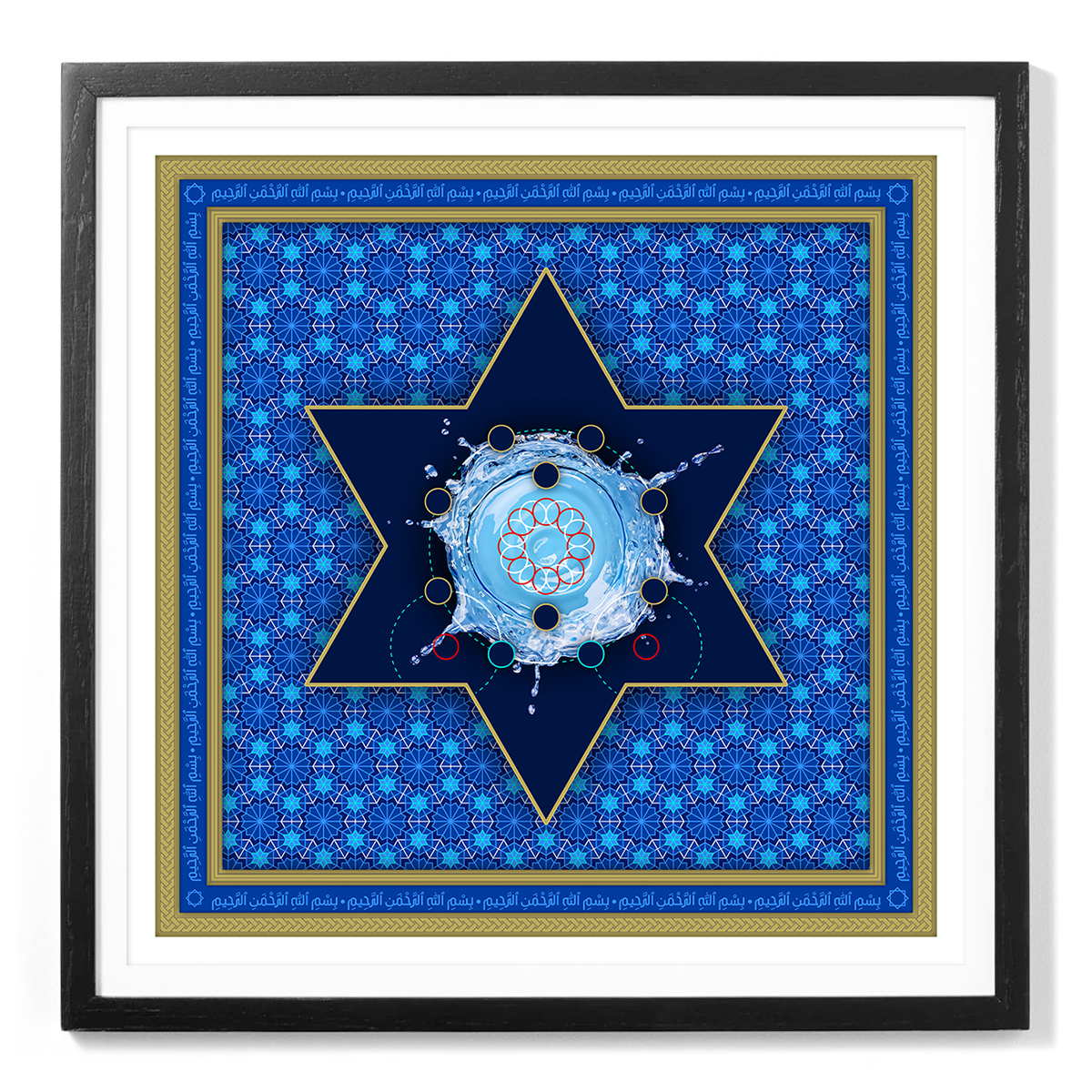 The foundation of life: water molecules are made up of H20; two hydrogen atoms (H), bonded to one oxygen (O) atom.

— Gary Wills, What the Qur’an Mean

“Adam (Arabic: آدم, Adam) is believed to have been the first human being on Earth and the first prophet (Arabic: نبي, nabī) of Islam.[1] Adam’s role as the father of the human race is looked upon by Muslims with reverence. Muslims also refer to his wife, Hawā (Arabic: حواء, Eve), as the ‘mother of mankind’.”[2]

Lines based on patterns found in Tilya-Kori Madrasah, Samarkand, Uzbekistan (1646) 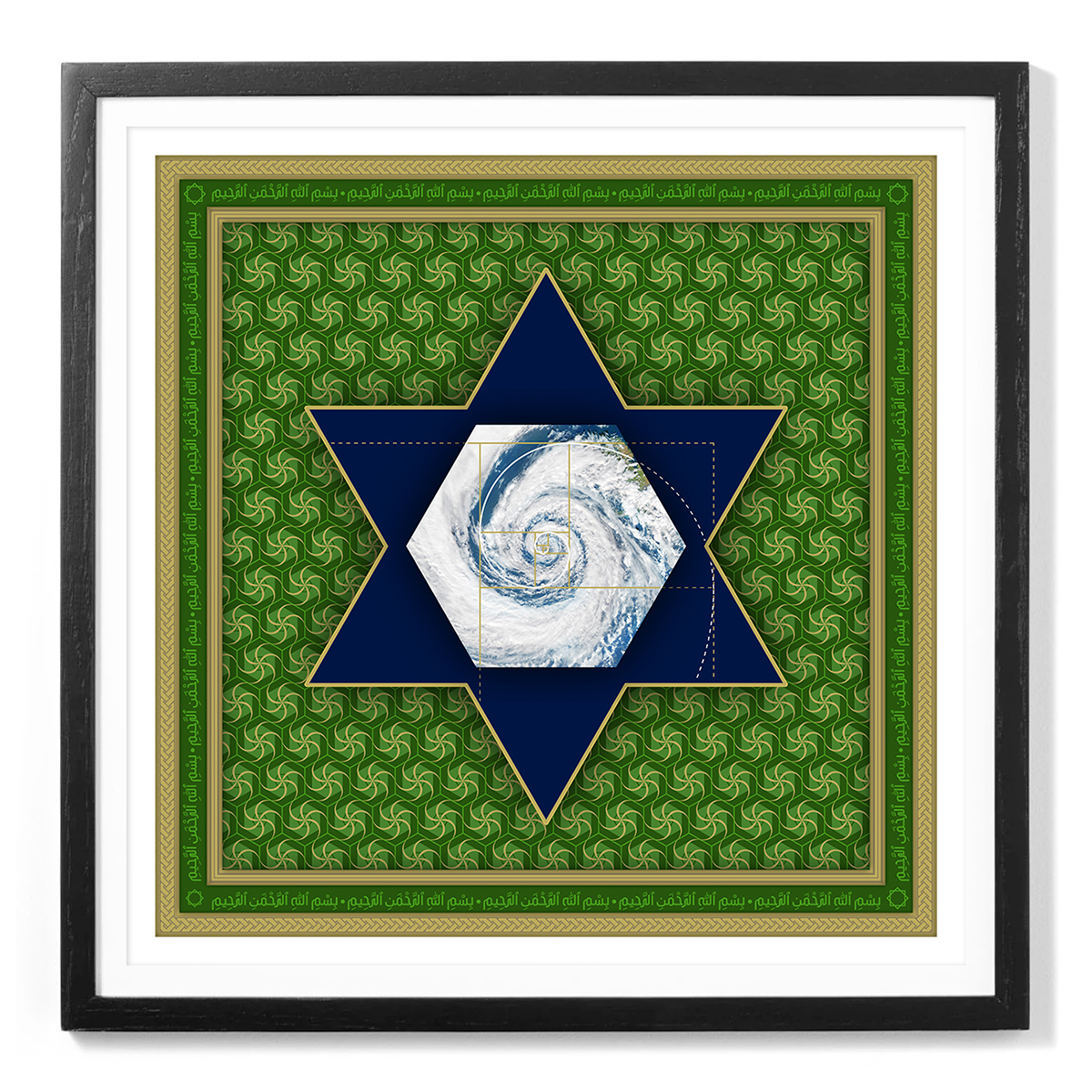 “…Spirals and helices are found throughout the natural world, in many forms, at every scale of existence: in spider-webs, galaxies and particle track, in animal horns, sea-shells, plant structures, and DNA. It is clearly one of nature’s favorite patterns. Logarithmic (or growth) spirals are the most intriguing and complex of all, particularly the ‘golden’ spiral that is associated with the Fibonacci series. Logarithmic spirals in general have the property of self-similarity, i.e., of looking the same at every scale.”

Lines based on patterns found in The Alhambra Palace, Granada, Spain (1302) 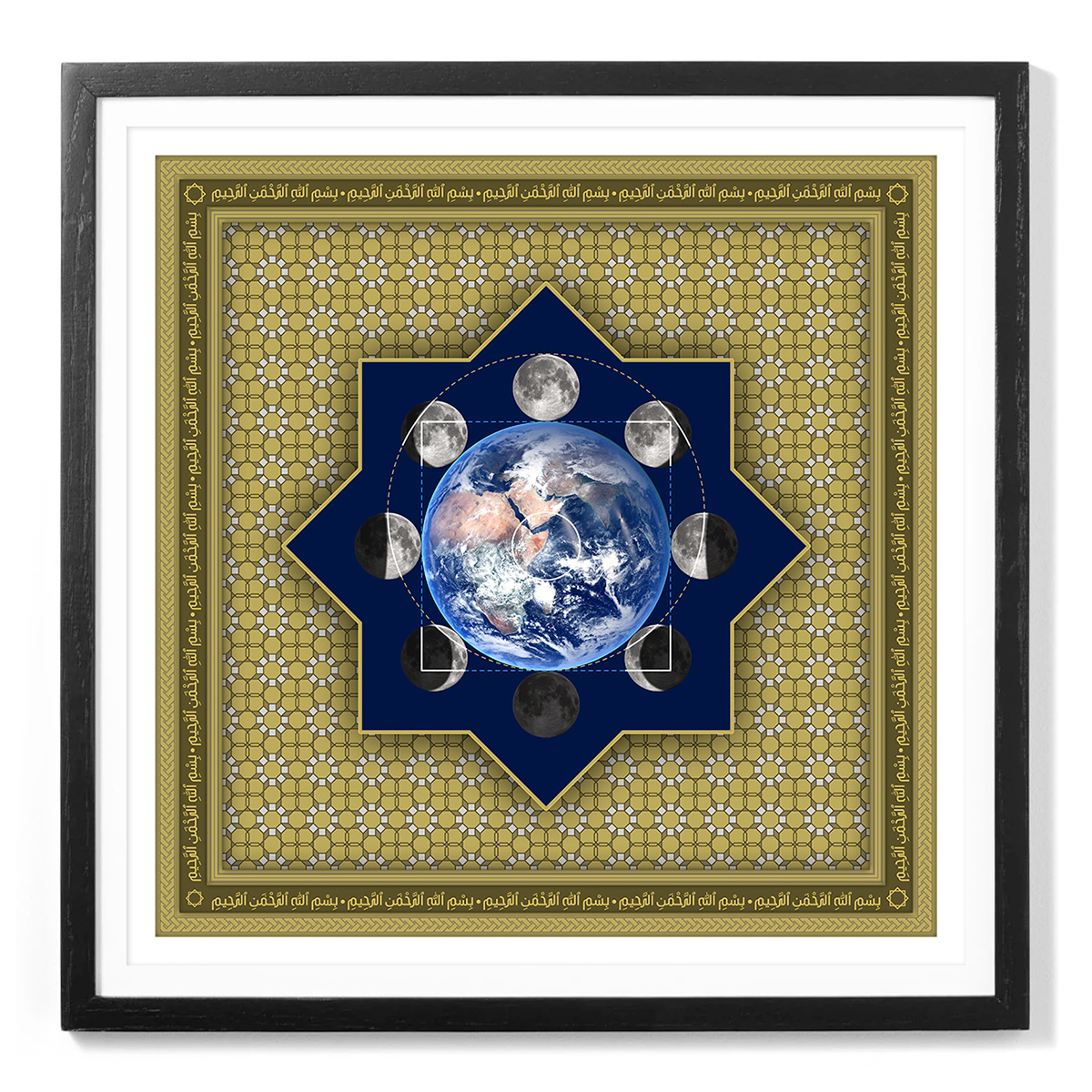 “If you draw down the Moon to the Earth, then the circle through the center of the heavenly Moon will have a circumference [almost] equal to the perimeter of a square enclosing the Earth.”

— John Martineau, A Little Book Of Coincidences In The Solar System

“Islam emerged in Arabia where travel along the desert trade routes was largely by night, and navigation depended upon the position of the moon and stars. The moon thus represents the guidance of God on the path through life. The new moon also represents the Muslim calendar, which has 12 months each of 29 or 30 days. So in Islam the lunar month and the calendar month coincide, and the new moon is eagerly awaited, especially at the end of the month of Ramadan when its sighting means that the celebrations of ‘Id al-Fitr can begin.”

Lines based on the eighth phases of the moon orbiting Earth. The moons can be seen as eight light-sand squares. 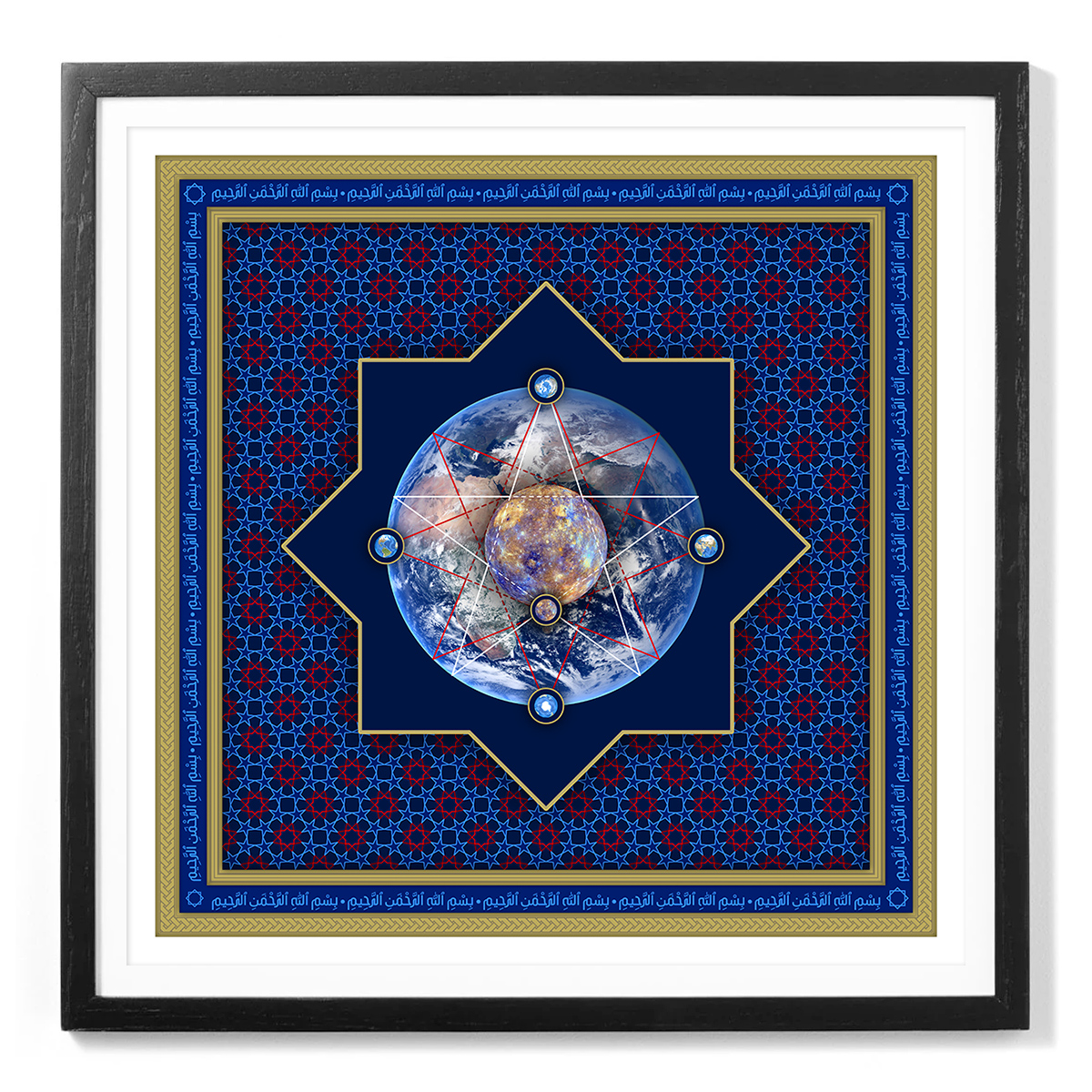 Travelling from Earth towards the Sun, we arrive at Mercury, the closest planet to our star. The radius of Mercury is 2,439.7 km, and Earth’s is 6,371 km. We see the same ratio in their average orbital distances from the sun, Earth at 149.6M km and Mercury at 108.2M km.

Lines based on patterns found in The Great Mosque of Kairouan, Tunisia (AD 670) 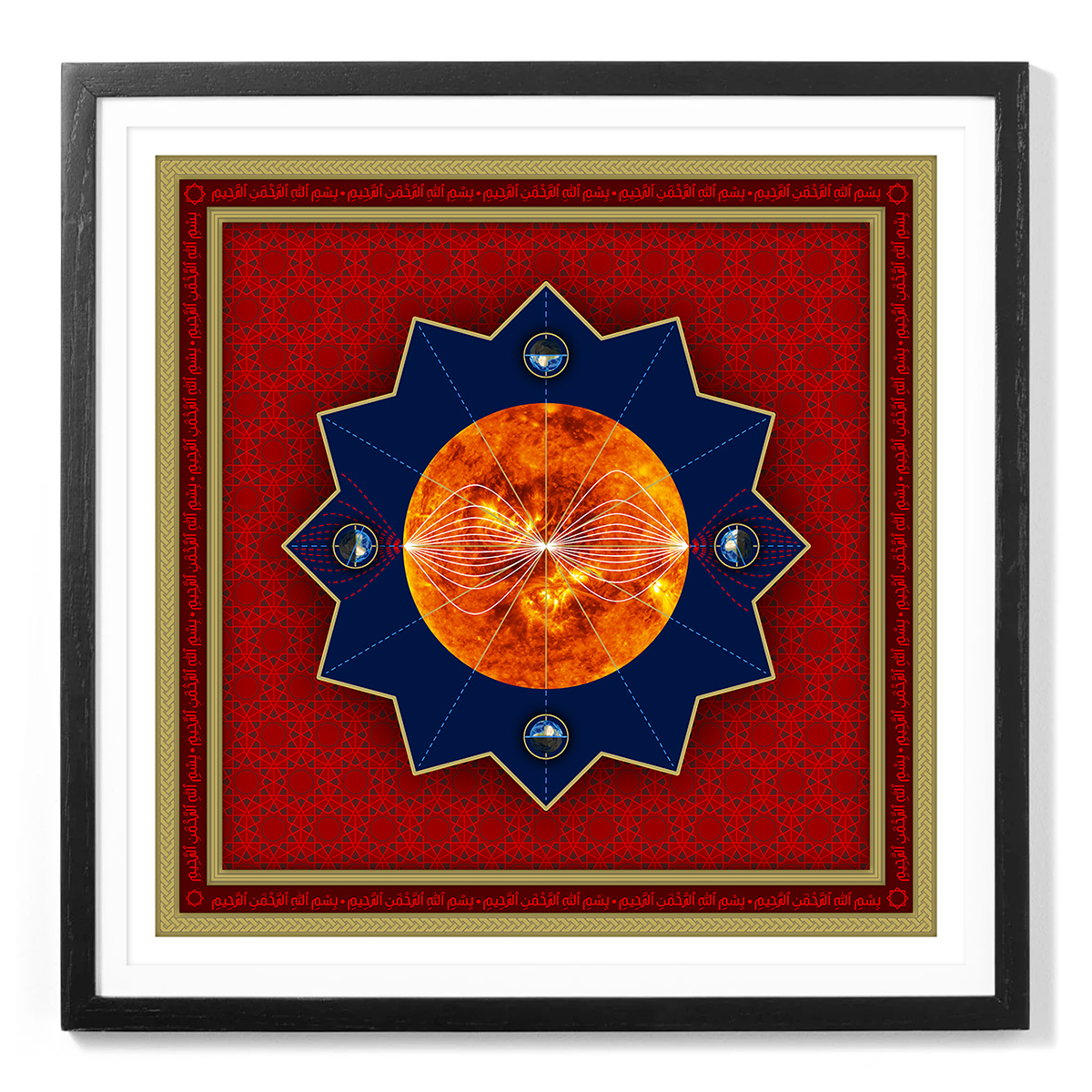 “The solar circle usually remains unchanged, symbolizing the Absolute, the source of light, warmth and fertility. In its apparently circular movement around the earth, the sun’s path or ecliptic is divided into the twelve houses of the zodiac, which has its origins in ancient times. The practitioner of Islamic geometry is aware of the sun and moon, both as the two primary regulators sustaining biological life and as symbols of eternity and revolving cycles. As such, the ‘sun circle’ is identified as the parent shape for all figures, with the ‘moon crescent representing the division of the circle and analytical stages for enabling the construction of an infinite variety of patterns.

In his book Time Stands Still, Keith Critchlow discusses the concept and meaning of the word ‘origin’ related to the sun and moon: “Similarly the word ‘origin’ is grounded in the early word oriri, to rise as the Sun, hence the link with the east, or orient, and orientation: the direction of the new-born light. ‘Lucid’ (clear, accurate). ‘luminous’ and ‘lunar’ come from the same source…”

The four Earths represent both the four seasons as well as the equinoxes and solstices. From the top going clockwise:
Spring Equinox (March 20), Summer Solstice (June 21), Autumn Equinox (September 22), and Winter Solstice (Dec 21). Earth’s 23.44° axial tilt can be seen more clearly at the two Solstices.

White and red: Waves represent different latitudes at 10° differences. Lines above horizontal gold line represent more daylight, while below represent less daylight. Latitude lines meet at equinoxes. Starting at the left edge of the Sun represents March 21st, center represents September 22, and the right edge, March 21st again, going through one full calendar year. The first set of extremes represents June 21, where the highest curve is 60° latitude, seeing 18 hours of daylight and the lowest curve is -60° latitude experiencing 5.3 hours of sunlight. The second extreme represents Dec 21st where 60° latittitude is now at its lowest, experiencing 6.6 hours of sunlight, and -60° latitude at its highest experiencing 19.5 hours of daylight. Because of Earth’s slight tilt, the wave curves are not identical.
Gold and blue: represent the 12 months of the year.

Lines based on patterns found in The Great Mosque of Herat, Afghanistan (1200 AD).
Twelve points around the dodecagram represent the twelve months of the year. In the center, a circle represents the Sun. 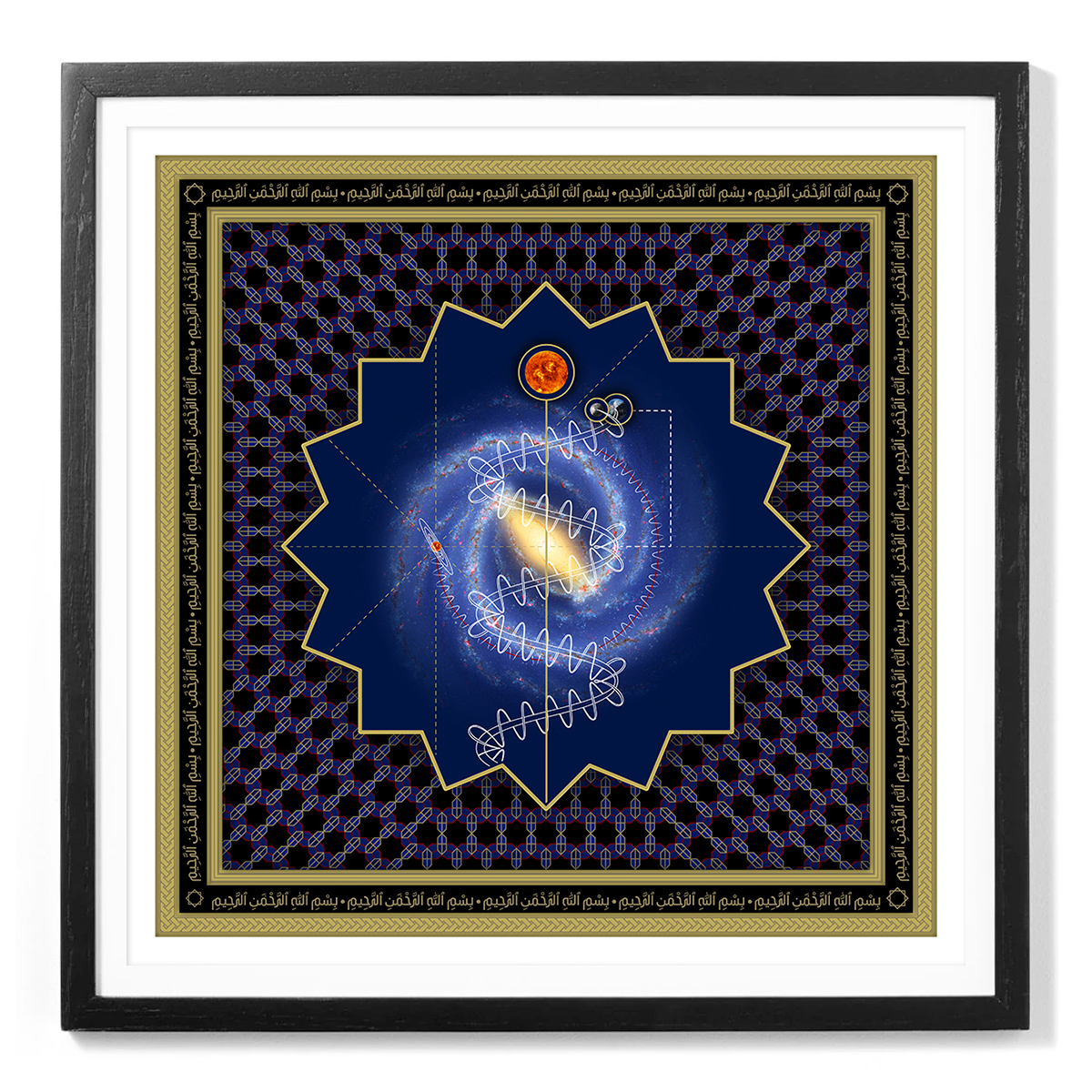 “Two thirds of all stars in the night sky with names have Arabic names. An homage to their ‘stellar’ navigational skills 1000 years ago, during the Golden Age of Islam.”

“The study of astronomy has a rich history within the Islamic tradition, particularly within the so-called ‘Islamic Golden Age’ from the 10th to the 12th century through figures such as Al-Khwarizmi, Al-Farghani, Ibn Al Haytham and Nasir al-Din al-Tulsi to name a few.”

— Faizal Nazir, Space and Islam: What You Didn’t Know”

“(God) is the One who has set out for you the stars, that you may guide yourselves by them through the darkness of the land and of the sea. We have detailed the signs for people who know.”

Lines based on patterns found on the ceilings in Abdullah Khan Madrasah, Bukhara (1598 AD)